The term "DEIB" (Diversity, Equity, Inclusion & Belonging) has become a hot phrase in Silicon Valley, as companies strive to create a workforce that's a better reflection of our communities. However, I find that Diversity and Inclusion tend to get lumped together as one thing, when in fact they're quite different. And achieving one without the other can create self-defeating tensions inside your company. Let's unpack them both, and I'll also share how I'm striving to be a DEIB accomplice, not just an ally, both on a personal front and as CEO of Armory.

Dancing at the Party

One of Armory's early employees, Monica, said it best when she referenced a Verna Myers quote:

Deepening this analogy, from Sue Odio:

Nobody wants to be invited to a party, only to awkwardly stand in the corner while everyone else is dancing. And as Monica pointed out, inclusion also means having a voice in creating the playlist – the music that everyone is dancing to.

Creating a company where every voice is heard is one of the best ways to create optimal outcomes. When every person in a company has the psychological safety to take a risk and share an idea, a thought, or an objection, a company is more creative and more successful. This is backed up by science, as described by the NYTimes article on Google's Project Aristotle:

The first finding was: On the good teams, members speak in roughly the same proportion:

The second was: Good teams have high social sensitivity: 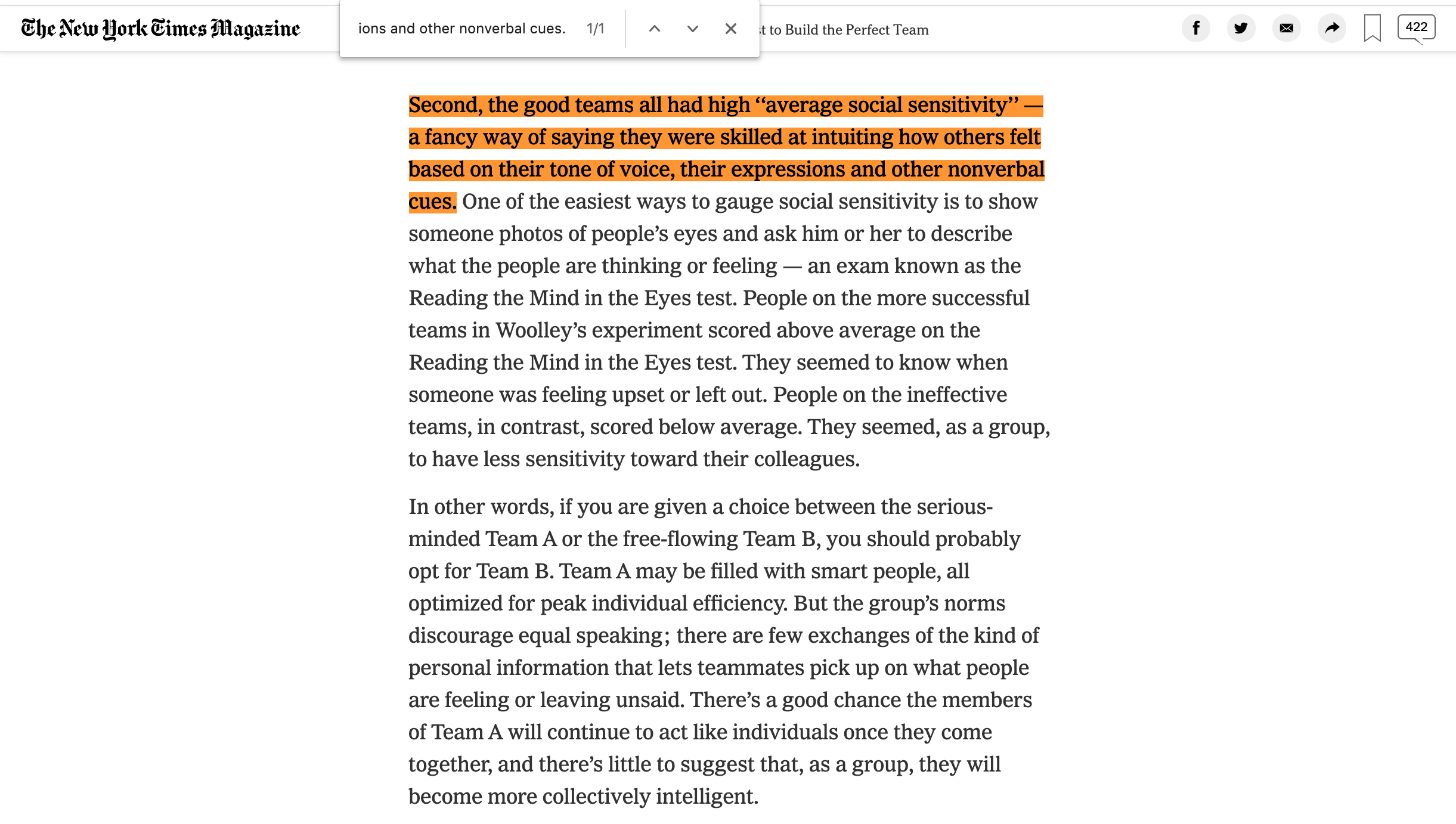 Having a diverse workforce sets the stage for many types of voices to be heard. But it's all for naught without having an inclusive environment with high psychological safety that enables a company to gain the benefit of those perspectives.

This is especially important in the knowledge economy, where value is created by having ideas, and then expressing those ideas as software features. In fact, the entire reason Armory exists is to facilitate that process at a massive scale within Global 2,000 companies. So it's especially important that we live these values ourselves, if we're going to have a chance of platforming them for the world.

It starts with an focus on diversity

Ensuring a diverse workforce is not something companies should think about as charity. A heterogeneous workforce means more voices will be around the table to provide more perspectives than a homogeneous workforce can provide. You've probably heard about the soap dispensers that don't work for people with dark skin. The AI algorithms that favor white people because of unintentional bias in the training data. Ensuring that people with diverse perspectives, thinking, cultures and backgrounds are in the room serves as a hedge against these kinds of mistakes.

But Silicon Valley's poor tech diversity scorecard shows that diversity doesn't just happen on its own – or even with the best of intentions. It takes a focused effort coupled with meaningful action. Tech isn't nearly as diverse as any of us would like it to be, which means that naturally, the candidates we find will come from less diverse talent pools. Armory's CPO advisor, Jabu Dayton, said it best when she said to me:

"Go watch this video by Willie Jackson – figure out how to be an accomplice, not just an ally."

That's a great message to every CEO in Silicon Valley and beyond: What are you doing to become an accomplice in ensuring diversity and inclusion in your companies and communities?

On a personal level, I have become an advisor to INROADS, a program that helped me enter the business world 20 years ago. I spoke at their Visiones 2020 conference to celebrate Hispanic Heritage Month, and I started a fundraising campaign with a "1% Pledge" program that I personally signed up for. I'm helping INROADS build and fund an entrepreneurship program for high school students from disadvantaged backgrounds. And I've gotten commitments from an incredible roster of Silicon Valley leaders and executives to join me in this initiative. These are all actions I'm taking to be an accomplice, and not just an ally, in helping the next generation of professionals from diverse backgrounds enter and succeed in the workforce.

On the professional front, at Armory, we prioritize diversity at the top of our candidate recruiting funnel. We define diversity across a set of primary and secondary characteristics (thanks to Kindred Partners for originally sharing this wheel with me): 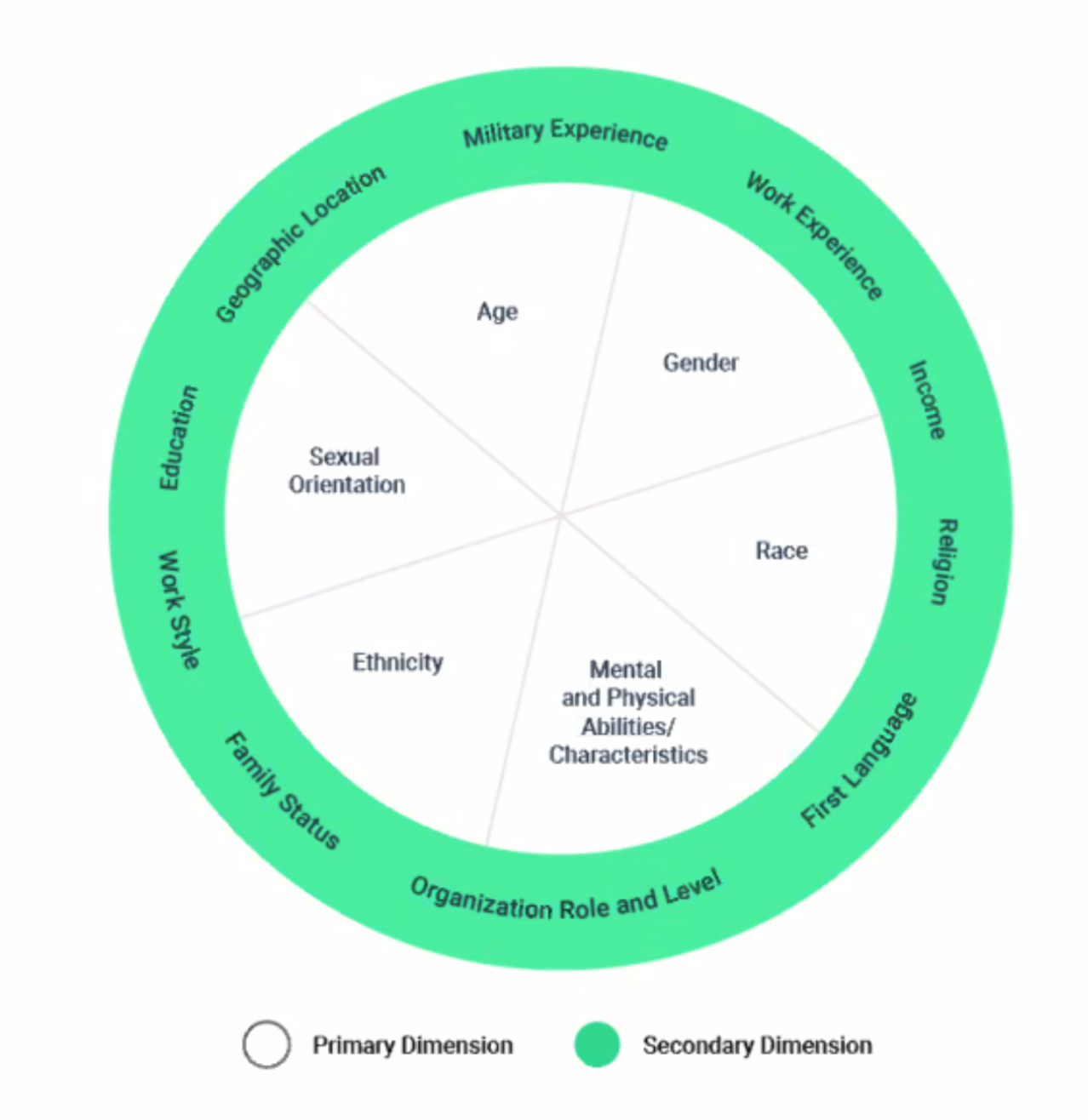 Our goal is to find top-of-funnel candidates across as many primary dimensions of diversity as we can.

We don't change our bottom-of-funnel recruiting process or hiring bar. The goal is to hire the best possible candidate for the role, regardless of any diversity considerations. But prioritizing diversity at the top of the funnel can be as simple as, for example, choosing to review the candidates with diverse backgrounds first when discussing a candidate funnel, and insisting on a strong mix of diversity in the overall funnel from the start. I find the best recruiters are very in-tune with this thinking.

But diversity is just the start

Hiring a diverse workforce is like a snowball rolling down a mountain and picking up speed and mass: The more you do it, the more it happens as the company grows. Candidates want to work at companies where they feel their perspective will be valued, and they'll be heard.

Figuring out how to create an inclusive environment is, by definition, something that requires listening to the softer and quieter voices in the room – those who naturally may not feel as included. It's a strong priority for me that we create a company that does this well, because it's a key to us building a platform that helps the world innovate faster through code.

I have a few more announcements I'll be making over the coming month to show through actions how I'm personally committed to being an accomplice, and not just an ally, in creating one of the most diverse and inclusive companies in Silicon Valley. And I encourage other CEOs to do the same.

Back in 2015, I rowed 1 million meters in eight months. Now I'm at it again – except this time I'm going to row 2.022 million meters in 2022. Anyone want to join me in this challenge? I'll be using using the #2.022-million Twitter hashtag to track my progress.

I recently wrote about creating a WFH workspace for under $5k using a Costco shed. In that post I shared how I could boost the internet connection's speed & reliability. I've not only done that, but I also went all-in on a robust solar generator setup powered by InergyTek. Powered

When we passed through NYC on our summer work+play roadtrip, one of Armory's clients put me in touch with an editor at Inc. Magazine, which turned into this story. Here's the video: Here's an in-depth interview: Here are screenshots from the article: